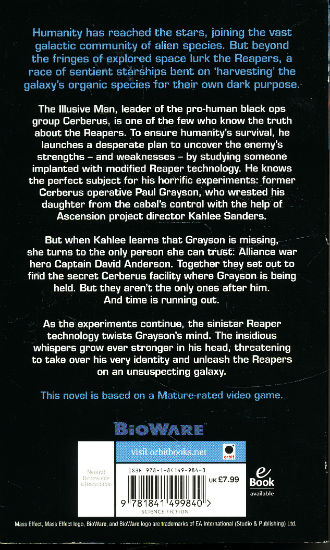 Humanity has reached the stars, joining the vast galatic community of alien species. But beyond the fringers of explored space lurk the Reapers, a race of sentient starships bent on “harvesting” the galaxy´s organic species for their own dark purpose.

The Illusive Man, leader fo the pro-human black ops group Cerberus, is one of the few who know the truth about the Reapers. To ensure humanity´s survival, he launches a desperate plan to uncover the enemy´s strengts – and weaknesses – by studying someone impalanted with modified Reaper technology. He knows the perfect subject for his horrific experiments: former Ceberus operative Paul Grayson, who wrested his daughter from the cabal´s control with the help of Ascension project director Kahlee Sanders.

But when Kahlee learns that Grayson is missing, she turns to the only person she can trust: Alliance war hero Captain David Anderson. Together they set out to find the secret Cerberus facility where Grayson is being held. But they aren´t the only ones after him. And time is running out.

As the experiments continue, the sinister Reaper technology twists Grayson´s mind. The insidious whispers grow ever stronger in his head, threatening to take over his very identity and unleash the Reapers on an unsuspecting galaxy.