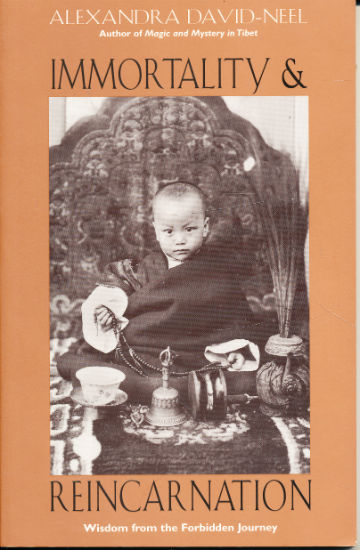 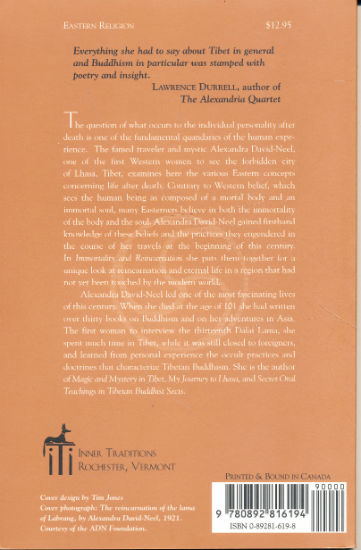 Everything she had to say about Tibet in general and Buddhism in particular was stamped with poetry and insight. – Lawrence Durrell, author of The Alexandria Quartet

The question of what occurs to the individual personality after death is one of the fundamental quandaries of the human experience. The famed traveler and mystic Alexandra David-Neel, on of the first Western women to see the forbidden city of Lhasa, Tibet, examines here the various Eastern concepts concerning life after death. Contrary to Western belief, which sees the human being as composed of a mortal body and an immortal soul, many Easterners believe in both the immortality of the body and the soul. Alexandra David-Neel gained firsthand knowledge of these beliefs and the practices they engendered in the course of her travels at the beginning of this century. In Immortality and Reincarnation she puts them together for a unique look at reincarnation and eternal life in a region that had not yet been touched by the modern world.
Alexandra David-Neel led one of the most fascinating lives of this century. When she died at the age of 101 she had written over thirty books on Buddhism and on her adventures in Asia. The first woman to interview the thirteenth Dalai Lama, she spent much time in Tibet, while it was still closed to foreigners, and learned from personal experience the occult practices and doctrines that characterize Tibetan Buddhism. She is the author of Magic and Mystery in Tibet, My Journey to Lhasa, and Secret Oral Teachings in Tibetan Buddhist Sects.