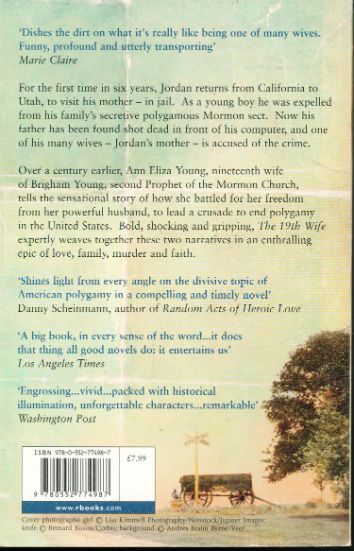 One sect, many secrets, …and murder.

This ambitious third novel tells two parallel stories of polygamy. The first recounts Brigham Young’s expulsion of one of his wives, Ann Eliza, from the Mormon Church; the second is a modern-day murder mystery set in a polygamous compound in Utah. Unfolding through an impressive variety of narrative forms—Wikipedia entries, academic research papers, newspaper opinion pieces—the stories include fascinating historical details. We are told, for instance, of Brigham Young’s ban on dramas that romanticized monogamous love at his community theater; as one of Young’s followers says, “I ain’t sitting through no play where a man makes such a cussed fuss over one woman.” Ebershoff demonstrates abundant virtuosity, as he convincingly inhabits the voices of both a nineteenth-century Mormon wife and a contemporary gay youth excommunicated from the church, while also managing to say something about the mysterious power of faith. – Amazon.com