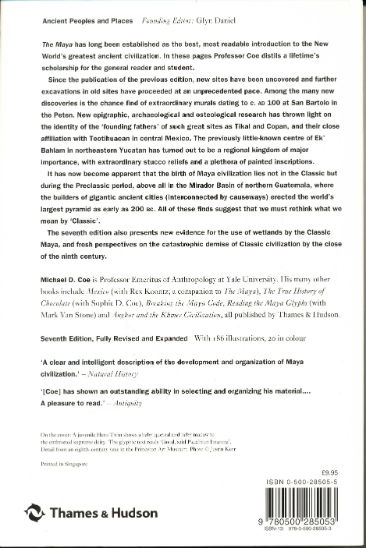 The Maya has long been established as the best, most readable introduction to the New World´s greatest ancient civilization. In these pages Professor Coe distils a lifetime´s scholarship for the general reader and student.

Since the publication of the previous edition, new sites have been uncovered and further excavations in old sites have proceeded at an unprecedented pace. Among the many new discoveries is the chance find of extraordinary murals dating to c. AD 100 at San Bartolo in the Peten. New epigraphic, archaeological and osteological research has thrown light on the identity of the “founding fathers” of such great sites as Tikal and Copan, and their close affiliation with Teotihuacan in central Mexico. The previously little-known centre of Ek´Bahlam in northeastern Yucatan has turned out to be a regional kingdom of major importance, with extraordinary stucco reliefs and a plethora of painted inscriptions.

It has now become apparent that the birth of Maya civilization lies not in the Classic but during the Preclassic period, above all in the Mirador Basin of northern Guatemala, where the builders of gigantic ancient cities (interconnected by causeways) erected the world´s largest pyramid as early as 200 BC. All of these finds suggest that we must rethink what we mean by “Classic”.

The seventh edition also presents new evidence for the use of wetlands by the Classic Maya, and fresh perspectives on the catastrophic demise of Classic civilization by the close of the ninth century.

Michael D. Coe is Professor Emeritus of Anthropology at Yale University. His many other books include “Mexico” (with Rex Koontz; a companion to “The Maya”), “The True History of Chocolate ” (with Sophie D. Coe), “Breaking the Maya Code”, “Reading the Maya Glyphs” (with Mark Van Stone) and “Angkor and the Khmer Civilization”, all published by Thames & Hudson.

Seventh Edition, Fully Revised and Expanded. With 186 illustrations, 20 in colour.

“A clear and intelligent description of the development and organization of Maya civilization.”

“[Coe) has shown an outstanding ability in selecting and organizing his material… A pleasure to read.”