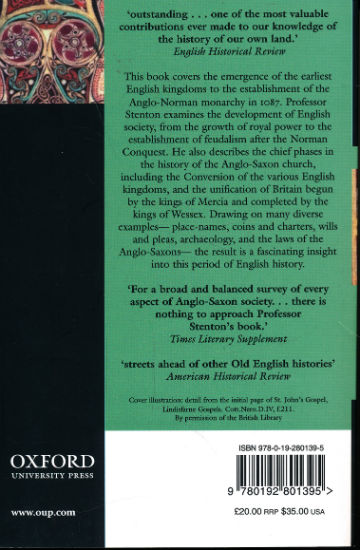 This book covers the emergence of the earliest English kingdoms to the establishment of the Anglo-Norman monarchy on 1087. Professor Stenton examines the development of English society, from the growth of royal power to the establishment of feudalism after the Norman Conquest. He also describes the chief phases in the history of the Anglo-Saxon church, including the Conversion of the various English kingdoms, and the unification of Britain begun by the kings of Mercia and completed by the kings of Wessex. Drawing on many diverse examples – place-names, coins and charters, wills and pleas, archaeology, and the laws of the Anglo-Saxons – the result is a fascinating insight into this period of English history.

“For a broad and balanced survey of every aspect of Anglo-Saxon society … there is nothing to approach Professor Stenton´s book.” – Times Literary Supplement

“streets ahead of other Old English histories” – American Historical Review