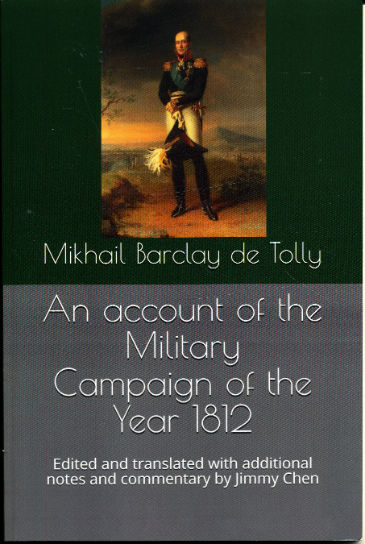 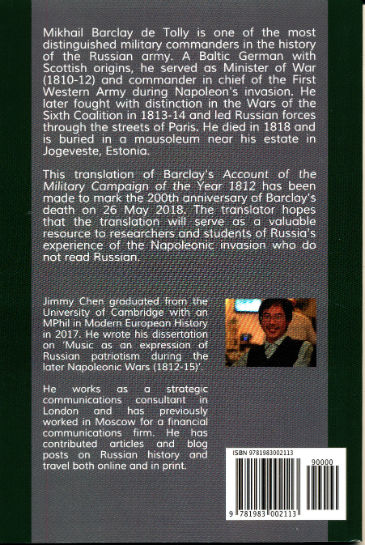 “An account of the Military Campaign of the Year 1812”

“An account of the Military Campaign of the Year 1812”

Edited and translated with additional notes and commentary by Jimmy Chen

Mikhail Barclay de Tolly is one of the most distinguished military commanders in the history of the Russian army. A Baltic German with Scottish origins, he served as Minister of War (1810-12) and commander in chief of the First Western Army during Napoleon´s invasion. He later fought with distinction in the Wars of the Sixth Coalition in 1813-14 and led Russian forces through the streets of Paris. He died in 1818 and is buried in a mausoleum near his estate in Jõgeveste, Estonia.

This translation of Barclay´s Account of the Military Campaign of the Year 1812 has been made to mark the 200th anniversary of Barclay´s death on 26 May 2018. The translator hopes that the translation will serve as a valuable resource to researchers and students of Russia´s experience of the Napoleonic invasion who do not read Russian.

Jimmy Chen graduated from the University of Cambridge with an MPhil in Mordern European History in 2017. He wrote his dissertation on “Music as an expression of Russian patriotism during the later Napoleonic Wars (1812-15)”.

He works as a strategic communications consultant in London and has previously worked in Moscow for a financial communications firm. He has contributed articles and blog posts on Russian history and travel both online and in print.