Avaleht » Pood » “Black Hundred: The Rise of the Extreme Right in Russia” 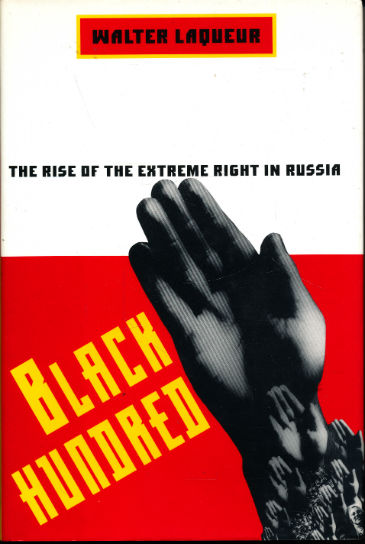 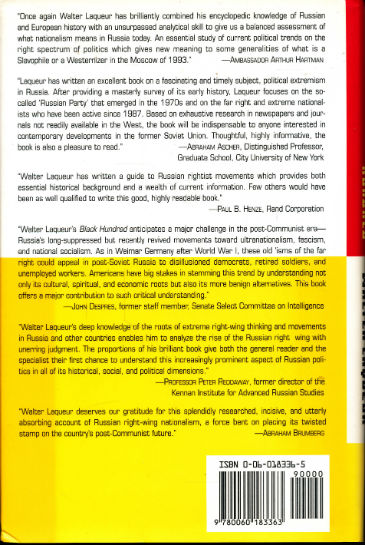 “Black Hundred: The Rise of the Extreme Right in Russia”

“Black Hundred: The Rise of the Extreme Right in Russia”

This pioneering study by eminent historian Walter Laqueur focuses on one of the most significant political forces to emerge in Russia since the fall of communism. The collapse of the Soviet Union has led to the second coming of the Russian right – an inchoate movement whose roots lie in the previous century and whose present resurgence is fueled by the economic distress and the absence of deeply rooted democratic institutions that characterize Russia today. Ignored by Soviets and Soviet-watchers alike since its rout in 1917, the extreme right – whose tenets range from satanism to fanatical racism – is now seizing its place in the very mainstream of politics. Paradoxically, it has been moving toward cooperation with its professed and abhorred enemies, the Communists.
Black Hundred is the first full-scale portrait of the contemporary Russian right to focus on its extreme groups. In it, Laqueur traces the movement back to its origins in the nineteenth century, to the Slavophiles and the original “Black Hundred”, a populist, xenophobic, and profoundly anti-Semitic movement. Their ideas have survived into this century in the belief in the existence of a giant global conspiracy of Masons, Jews, and democrats allied against the interests and very existence of the Russian people. Using rare and hitherto virtually inaccessible sources, Laqueur studies groups such as the openly fascistic and anti-Semitic Pamyat, varios monarchist factions, fanatical sects within the Orthodox chuch, the reemerging Cossacks. and “new nationalists” opposed to any rapprochement with the West. Their cultist beliefs include black magic, astrology, paganism, and a pervasive persecution mania.
Sharply differentiating between the legitimate concerns of Russian patriotism and the pathological fantasies of the extreme right, Laqueur investigates the economic, social, and political orientation and influences of the far right, as well as examining the role of religion and the church in its ideology. Despite its internal rifts, the right holds firmly to its belief that “time works for them,” and it is their ambition to restore Russia´s position as a global power. Given Russia´s precarious situation, the far right will play a crucial role in the coming years. This book holds the key to understanding its history, its future, and Russia´s place in the course of world affairs.

Be the first to review ““Black Hundred: The Rise of the Extreme Right in Russia”” Tühista vastus